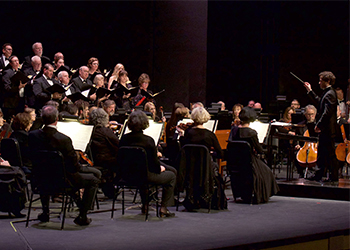 Gustav Mahler’s most popular and successful work will be featured by the Signature Symphony at Tulsa Community College at the final Signature Classics concert for the 2018-2019 season. The performance, “Mahler’s Resurrection,” is 7:30 p.m., April 20 at the VanTrease Performing Arts Center for Education on the TCC Southeast Campus.

The concert marks the third installment of a multi-year initiative, The Mahler Project, which involves a performance of a Mahler symphony in concert, preceded by a multimedia exploration of his life and work.

“One of the important aspects of The Mahler Project is the emphasis on education and our ability to explore, with the audience, the composer’s life and work,” said Andrés Franco, Signature Symphony at TCC music director.

Mahler’s Symphony No. 2 in C minor (Resurrection) is the first major work that established his lifelong view of the beauty of the afterlife and resurrection. The program features soprano Maria Lindsey, mezzo-soprano Clara Osowski, the University of Tulsa Concert Chorale and the Signature Chorale.

“Mahler lived a complex, tragic, and yet ultimately triumphant life. Music channeled the sum of his experiences so vividly; it’s no wonder orchestras and audiences in communities everywhere appreciate the opportunity to explore his music together,” said Franco.

The public is also invited to attend an Open Rehearsal featuring an interactive experience with guest artists Lindsey and Osowski at 6:30 p.m., April 18. The evening is a free community outreach event for music lovers of all ages and begins with a few comments from the guest artist and conductor, then a Q&A session followed by a portion of the rehearsal.

Since its formation in 1979, the Signature Symphony at TCC has been committed to providing rich musical experiences through live performances, as well as music education and community outreach. The Open Rehearsal held on the Thursday evening before every Classics concert is one example.

Signature Symphony at TCC recently announced its 2019-2020 season with a salute to Rodgers & Hammerstein, a visit to the Emerald City for and a line-up of some of the most celebrated Fifth Symphonies including those by Beethoven, Tchaikovsky, and Shostakovich.

Tickets start at $12 for adults for this Signature Classics concert. Student rush tickets are available one-hour before the performance for $5. For tickets and info, www.signaturesymphony.org or call 918-595-7777.

Season renewals and season tickets for 2019-2020 are also on sale for the Signature Classics and TTCU Pops series. A season subscription offers a substantial savings over purchasing individual tickets. Season ticket prices start at $75.