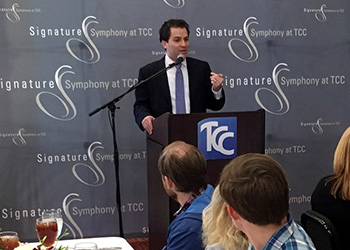 Follow the yellow brick road as Signature Symphony at Tulsa Community College begins the 2019-2020 TTCU Pops series with two witches and a young girl from Kansas and ends in Oklahoma with the brilliant team of Richard Rodgers and Oscar Hammerstein. The 2019-2020 season also includes some of the most celebrated Fifth Symphonies including those by Beethoven, Tchaikovsky, and Shostakovich.

The 2019-2020 season kicks-off with a visit to the Emerald City for The Wonderful Music of Oz. Audience members will fly over the rainbow with music from Broadway’s “Wicked,” “The Wiz,” and Hollywood’s “The Wizard of Oz.” From there, we celebrate the work of the late Ernie Fields, an African-American trombonist, pianist, arranger and bandleader. The Golden Age of Greenwood will feature Fields’ music when the development of R&B, swing, soul and funk music in America was sprouting right here in Tulsa. Fields’ son, Ernie Fields Jr. will be guest saxophonist, who has worked with James Brown and on TV shows such as “American Idol” and “The Voice.”

“This concert is one of the most important this season by marking the positive influence of Fields to the music scene and the Greenwood district in Tulsa,” said Andrés Franco, Signature Symphony at TCC Music Director. “Fields also had the distinction, with the help and support of Bob Wills, as part of the first black band to play the landmark Cain’s Ballroom in Tulsa.”

The TTCU Pops series also includes Christmas in Tulsa featuring the winner of the 2019 Tulsa Sings! vocal competition. The music of Aretha Franklin, Whitney Houston and Tina Turner is the featured in Queens of Rock and Soul with guest artist, LaKisha Jones, finalist from “American Idol” season six. The final show, You’re Doin’ Fine, Oklahoma!  Tulsa Sings Rodgers and Hammerstein, not only showcases music from “Oklahoma!,” “The King and I,” “South Pacific,” “Carousel,” “Cinderella,” and “The Sound of Music” but features the third annual Tulsa Sings! competition.

“To celebrate my fifth Season as Signature Symphony’s music director, I have chosen three iconic Fifth Symphonies, as well a one of my favorite works by Mahler, “Das Lied von der Erde,”” said Franco.

The Signature Classics series begins with Tchaikovsky’s Symphony No. 5 in E minor and guest artist Jeff Midkiff performing his own mandolin concerto. Concerts will also feature Beethoven’s Symphony No. 5 in C minor with Signature Symphony musician Stephen Goforth as guest artist and a program of works by Haydn, Schubert, and Mozart with guest conductor and violinist Alejandro Gómez Guillén. We will see the fourth installment of Signature Symphony’s Mahler Project. The Song of the Earth features Mahler’s “Das Lied von der Erde” with guest vocalists Clara Osowski and John David Nevergall.

We also continue our education series by exploring Shostakovich’s Symphony No. 5 in D minor, op. 47. Connecting the Dots – Bringing the Score to Life breaks down the piece with a look at the history and musical elements during the first half of the concert followed by the performance in the second half of the concert.

Since its formation in 1979, the Signature Symphony at TCC has been committed to providing rich musical experiences through live performances, as well as music education and community outreach. Each year Signature Symphony musicians expose over 4,000 Tulsa area students to classical music through educational programs for preschool through college, free open rehearsals, and discounted coupons for families and students.  The orchestra also reaches the community through Helpful Harmonies for Wellness, a concert series focusing on sensory friendly performances in nursing homes and memory care centers.

Season renewals and season tickets for 2019-2020 (pdf) are on sale for the Signature Classics and TTCU Pops series. A season subscription offers a substantial savings over purchasing individual tickets. Season ticket prices start at $75. For more information call 918-595-7777.